What is the Dow Theory?

Essentially, the Dow Theory is a framework for technical analysis, which is based on the writings of Charles Dow concerning market theory.

Dow was the founder and editor of the Wall Street Journal and the co-founder of Dow Jones & Company. As part of the company, he helped create the first stock index, known as the Dow Jones Transportation Index (DJT), followed by the Dow Jones Industrial Average (DJIA).

Dow never wrote his ideas as a specific theory and didn’t refer to them as such. Still, many learned from him through his editorials in the Wall Street Journal. After his death, other editors, such as William Hamilton, refined these ideas and used his editorials to put together what is now known as the Dow Theory.

This article provides an introduction to the Dow Theory, discussing the different stages of market trends based on Dow’s work. As with any theory, the following principles are not infallible and are open to interpretation.

The Basic Principles Of Dow Theory

The Market Reflects Everything

This principle is closely aligned with the so-called Efficient Market Hypothesis (EMH). Dow believed that the market discounts everything, which means that all available information is already reflected in the price.

For example, if a company is widely expected to report positive improved earnings, the market will reflect this before it happens. Demand for their shares will increase prior to the report being released, and then the price may not change that much after the expected positive report finally comes out.

In some cases, Dow observed that a company might see their stock price reduce after good news because it wasn’t quite as good as expected.

This principle is still believed to be true by many traders and investors, particularly by those that make extensive use of technical analysis. However, those that prefer fundamental analysis disagree and believe the market value does not reflect the intrinsic value of a stock.

Some people say that Dow’s work is what gave birth to the concept of a market trend, which is now deemed as an essential element of the financial world. The Dow Theory says that there are three main types of market trends:

By examining these different trends, investors can find opportunities. While the primary trend is the key one to consider, favorable opportunities tend to occur when secondary and tertiary trends seem to contradict the primary one.

For example, if you believe a cryptocurrency has a positive primary trend, but it experiences a negative secondary trend, there may be an opportunity to purchase it relatively low, and try to sell once its value has increased.

The problem now, as then, is in recognizing what type of trend you are observing, and that’s where deeper technical analysis comes in. Today, investors and traders use a wide range of analytical tools to help them understand what type of trend they are looking at.

The Three Phases Of Primary Trends

Dow established that long-term primary trends have three phases. For example, in a bull market, the phases would be: 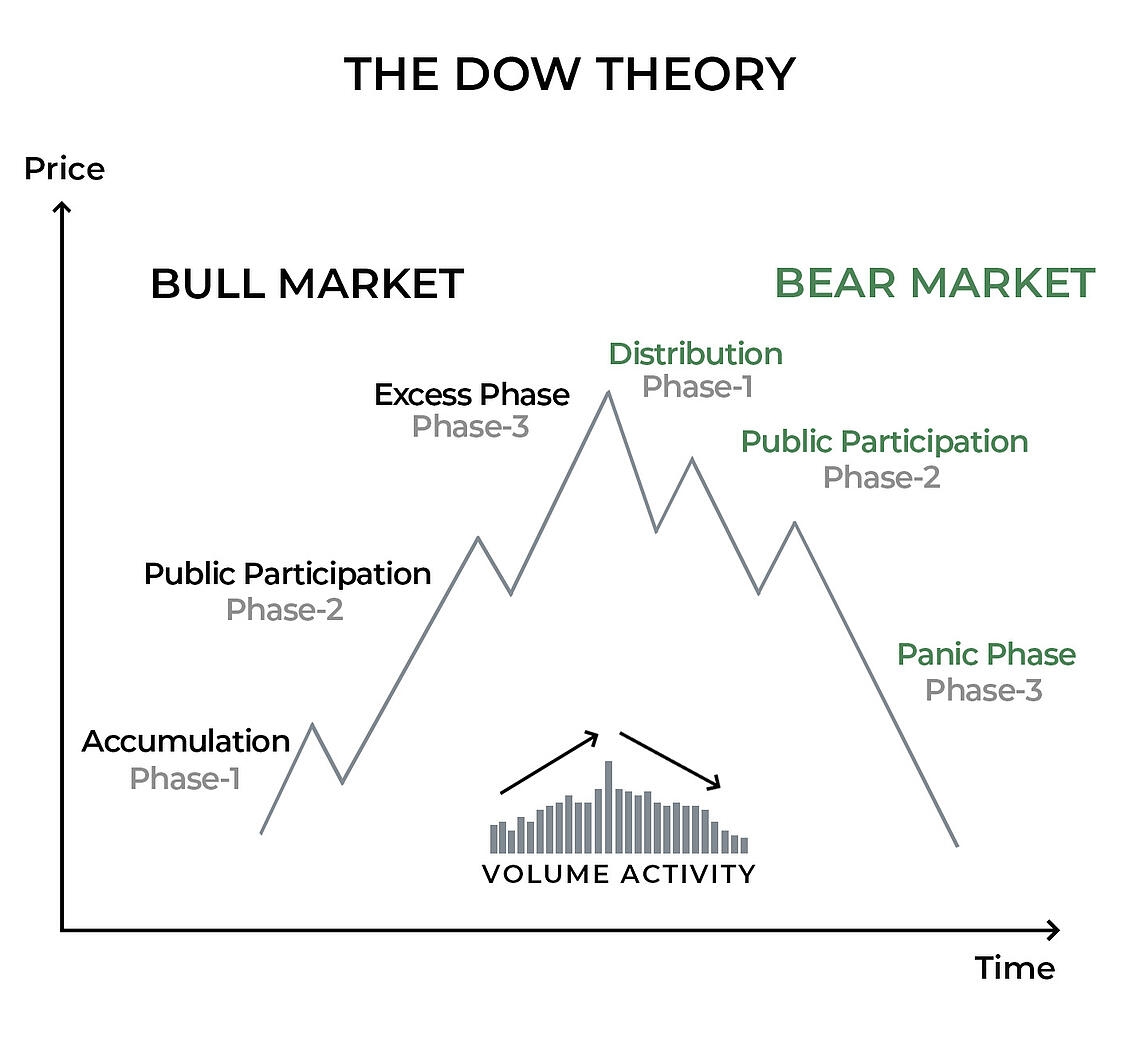 In a bear market, the phases would essentially be reversed. The trend would start with distribution from those who recognize the signs and be followed by public participation. In the third phase, the public would continue to despair, but investors who can see the upcoming shift will begin accumulating again.

There is no guarantee that the principle will hold true, but thousands of traders and investors consider these phases before taking action. Notably, the Wyckoff Method also relies on the ideas of accumulation and distribution, describing a somewhat similar concept of market cycles (moving from one phase to another).

Back then, the transportation market (mainly railroads) was heavily linked to industrial activity. This stands to reason: for more goods to be produced, an increase in rail activity was first needed to provide the necessary raw materials.

As such, there was a clear correlation between the manufacturing industry and the transportation market. If one were healthy, the other would likely be as well. However, the principle of cross-index correlation doesn’t hold up quite as well today because many goods are digital and don’t require physical delivery.

As many investors do now, Dow believed in volume as a crucial secondary indicator, meaning that a strong trend should be accompanied by a high trading volume. The higher the volume, the more likely it is that the movement reflects the true trend of the market. When the trading volume is low, the price action may not represent the true market trend.

Trends Are Valid Until A Reversal Is Confirmed