Fibonacci retracement levels—stemming from the Fibonacci sequence—are horizontal lines that indicate where support and resistance are likely to occur.

Each level is associated with a percentage. The percentage is how much of a prior move the price has retraced. The Fibonacci retracement levels are 23.6%, 38.2%, 61.8%, and 78.6%. While not officially a Fibonacci ratio, 50% is also used.

The indicator is useful because it can be drawn between any two significant price points, such as a high and a low. The indicator will then create the levels between those two points.

Suppose the price of a stock rises $10 and then drops $2.36. In that case, it has retraced 23.6%, which is a Fibonacci number. Fibonacci numbers are found throughout nature. Therefore, many traders believe that these numbers also have relevance in financial markets. 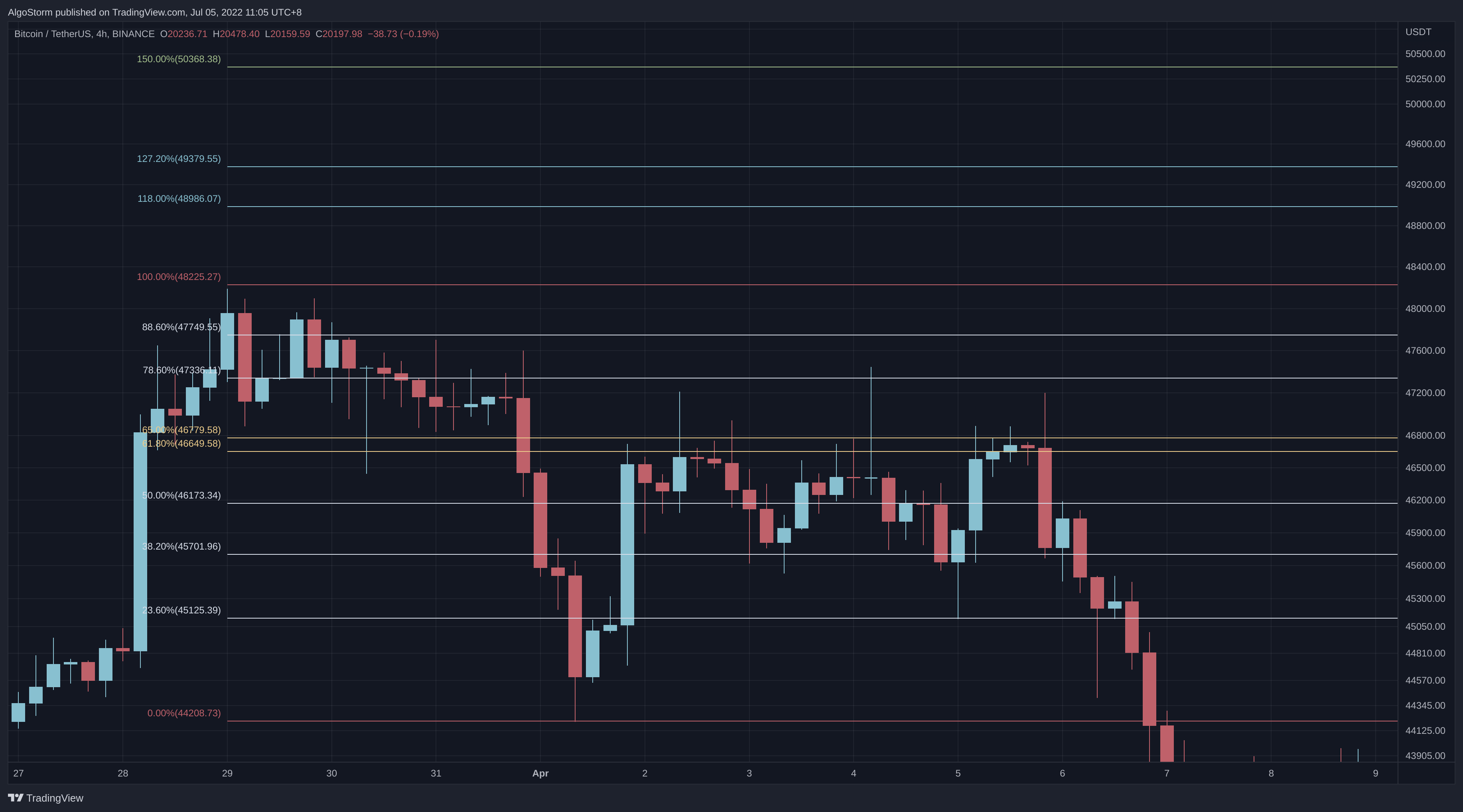 Despite its name, the Fibonacci sequence was not developed by its namesake. Instead, centuries before Leonardo Fibonacci shared it with western Europe, it was developed and used by Indian mathematicians.

It is estimated that Fibonacci numbers existed in Indian society as early as 200 AD.

The Formula for Fibonacci Retracement Levels

Fibonacci retracement levels do not have formulas. When these indicators are applied to a chart, the user chooses two points. Once those two points are chosen, the lines are drawn at percentages of that move.

As discussed above, there is nothing to calculate when it comes to Fibonacci retracement levels. They are simply percentages of whatever price range is chosen.

However, the origin of the Fibonacci numbers is fascinating. They are based on something called the Golden Ratio. Start a sequence of numbers with zero and one. Then, keep adding the prior two numbers to get a number string like this:

The Fibonacci retracement levels are all derived from this number string. After the sequence gets going, dividing one number by the next number yields 0.618, or 61.8%. Divide a number by the second number to its right, and the result is 0.382 or 38.2%. All the ratios, except for 50% (since it is not an official Fibonacci number), are based on some mathematical calculation involving this number string.

The Golden Ratio, known as the divine proportion, can be found in various spaces, from geometry to human DNA.

Interestingly, the Golden Ratio of 0.618 or 1.618 is found in sunflowers, galaxy formations, shells, historical artifacts, and architecture.

For example, a trader may see a stock moving higher. After a move up, it retraces to the 61.8% level. Then, it starts to go up again. Since the bounce occurred at a Fibonacci level during an uptrend, the trader decides to buy. The trader might set a stop loss at the 61.8% level, as a return below that level could indicate that the rally has failed.

Market trends are more accurately identified when other analysis tools are used with the Fibonacci approach.

Fibonacci retracement levels are static, unlike moving averages. The static nature of the price levels allows for quick and easy identification. That helps traders and investors to anticipate and react prudently when the price levels are tested. These levels are inflection points where some type of price action is expected, either a reversal or a break.

While the retracement levels indicate where the price might find support or resistance, there are no assurances the price will actually stop there. This is why other confirmation signals are often used, such as the price starting to bounce off the level.

The other argument against Fibonacci retracement levels is that there are so many of them that the price is likely to reverse near one of them quite often. The problem is that traders struggle to know which one will be useful at any particular time. When it doesn’t work out, it can always be claimed that the trader should have been looking at another Fibonacci retracement level instead.

When fitting Fibonacci retracements to price action, it’s always good to keep your reference points consistent. So, if you are referencing the lowest price of a trend through the close of a session or the body of the candle, the best high price should be available within the body of a candle at the top of a trend: candle body to candle body; wick to wick.

Incorrect analysis and mistakes are created once the reference points are mixed—going from a candle wick to the body of a candle.

New traders often try to measure significant moves and pullbacks in the short term without keeping the bigger picture in mind. This narrow perspective makes short-term trades more than a bit misguided. By keeping tabs on the long-term trend, the trader can apply Fibonacci retracements in the correct direction of the momentum and set themselves up for great opportunities.

Fibonacci can provide reliable trade setups, but not without confirmation.

Applying additional technical tools like MACD or stochastic oscillators will support the trade opportunity and increase the likelihood of a good trade. Without these methods to act as confirmation, a trader has little more than hope for a positive outcome.

Day trading in the foreign exchange market is exciting, but there is a lot of volatility. For this reason, applying Fibonacci retracements over a short timeframe is ineffective.

The shorter the timeframe, the less reliable the retracement levels. Volatility can, and will, skew support and resistance levels, making it very difficult for the trader to pick and choose what levels can be traded. Not to mention in the short term, spikes and whipsaws are very common. These dynamics can make it especially difficult to place stops or take profit points as retracements can create narrow and tight confluences.