It can be measured and calculated based on historical prices and can be used for trend identification. It also typically signals if a market is overbought or oversold (meaning price is unjustifiably high or unjustifiably low), which can point to a stalling or reversal of the trend.

Identifying the points where price potentially stops and reverses is very helpful to any trader. They are commonly used in combination with other signal-generating conditions. There are several volatility-based indicators all using volatility in a clever way to help identify trading opportunities.

Our team at AlgoStorm.com uses our own advanced volatility and trend indicator (It is called: FWD). You can access this indicator as part of your membership of AlgoStorm.

The FWD indicator is a complete trading system that takes trend, momentum, volatility , and volume into account.

To access our trading system, indicators, and strategies, join us at:
https://www.patreon.com/algostorm

Note: In case you like to trade with free trend-based indicators, this guide will cover the most notable ones.

The average true range (ATR) is a technical analysis indicator, introduced by market technician J. Welles Wilder Jr. in his book "New Concepts in Technical Trading Systems", that measures market volatility by decomposing the entire range of an asset price for that period. 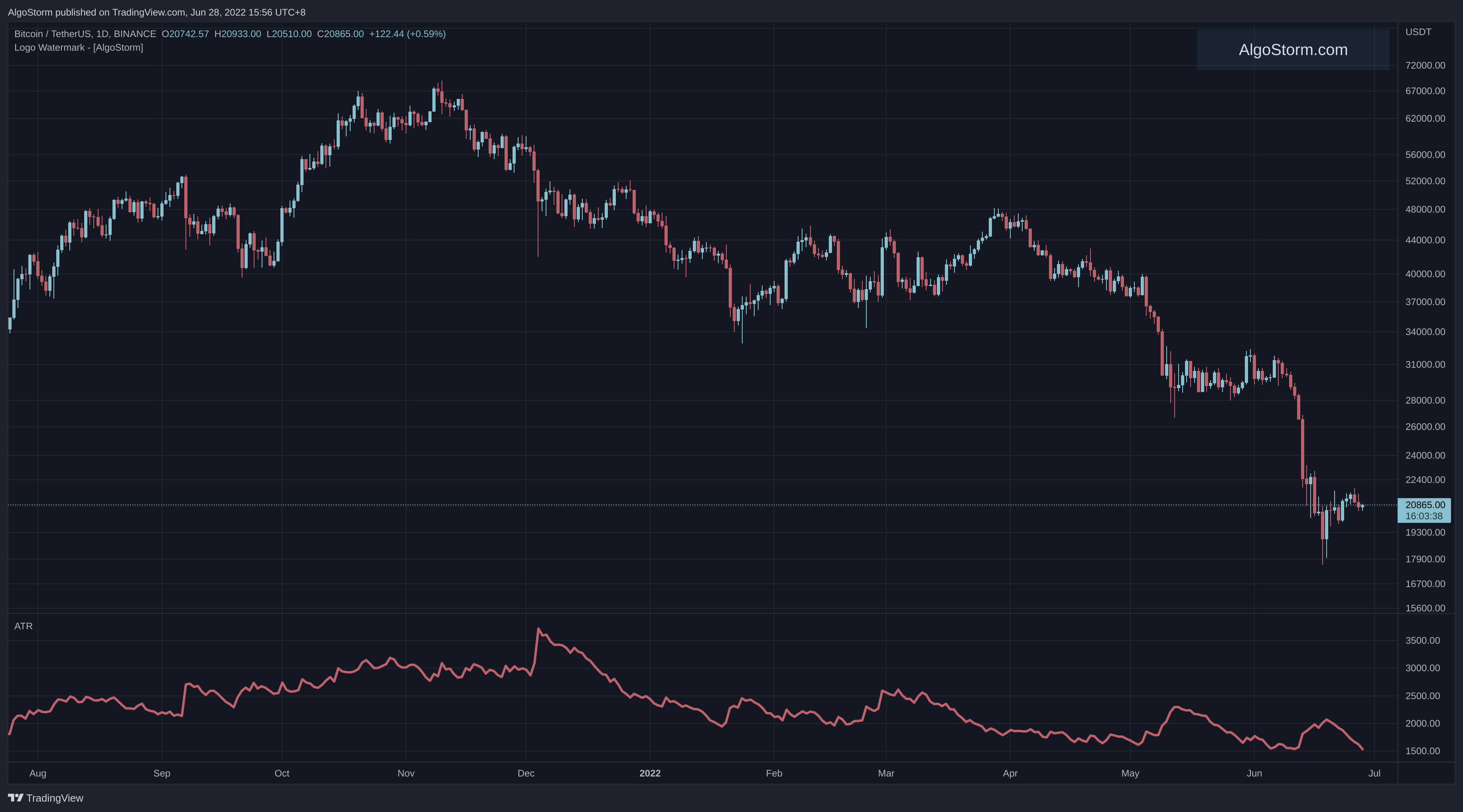 For example, assume a short-term trader only wishes to analyze the volatility of a stock over a period of five trading days. Therefore, the trader could calculate the five-day ATR.

These calculations of the true range are done for the five most recent trading days and are then averaged to calculate the first value of the five-day ATR.

Wilder originally developed the ATR for commodities, although the indicator can also be used for stocks and indices. Simply put, a stock experiencing a high level of volatility has a higher ATR, and a low volatility stock has a lower ATR.

The ATR may be used by market technicians to enter and exit trades, and is a useful tool to add to a trading system. It was created to allow traders to more accurately measure the daily volatility of an asset by using simple calculations. The indicator does not indicate the price direction; rather it is used primarily to measure volatility caused by gaps and limit up or down moves. The ATR is fairly simple to calculate and only needs historical price data.

The ATR is commonly used as an exit method that can be applied no matter how the entry decision is made.

The ATR can also give a trader an indication of what size trade to put on in derivatives markets. It is possible to use the ATR approach to position sizing that accounts for an individual trader’s own willingness to accept risk as well as the volatility of the underlying market.

There are two main limitations to using the ATR indicator.

The first is that ATR is a subjective measure, meaning that it is open to interpretation. There is no single ATR value that will tell you with any certainty that a trend is about to reverse or not. Instead, ATR readings should always be compared against earlier readings to get a feel of a trend’s strength or weakness.

Second, ATR only measures volatility and not the direction of an asset’s price. This can sometimes result in mixed signals, particularly when markets are experiencing pivots or when trends are at turning points. For instance, a sudden increase in the ATR following a large move counter to the prevailing trend may lead some traders to think the ATR is confirming the old trend; however, this may not actually be the case.

A Bollinger Band is a technical analysis tool defined by a set of trendlines plotted two standard deviations (positively and negatively) away from a simple moving average (SMA) of a security’s price, but which can be adjusted to user preferences.

Bollinger Bands were developed and copyrighted by famous technical trader John Bollinger, designed to discover opportunities that give investors a higher probability of properly identifying when an asset is oversold or overbought.

The first step in calculating Bollinger Bands is to compute the simple moving average of the security in question, typically using a 20-day SMA.

A 20-day moving average would average out the closing prices for the first 20 days as the first data point. The next data point would drop the earliest price, add the price on day 21 and take the average, and so on.

Next, the standard deviation of the security’s price will be obtained. Standard deviation is a mathematical measurement of average variance and features prominently in statistics, economics, accounting, and finance.

For a given data set, the standard deviation measures how spread out numbers are from an average value. Standard deviation can be calculated by taking the square root of the variance, which itself is the average of the squared differences of the mean.

Next, multiply that standard deviation value by two and both add and subtract that amount from each point along the SMA. Those produce the upper and lower bands.

The 22 Rules Of Bollinger Bands:
https://www.bollingerbands.com/bollinger-band-rules

The squeeze is the central concept of Bollinger Bands. When the bands come close together, constricting the moving average, it is called a squeeze.

A squeeze signals a period of low volatility and is considered by traders to be a potential sign of future increased volatility and possible trading opportunities.

Conversely, the wider apart the bands move, the more likely the chance of a decrease in volatility and the greater the possibility of exiting a trade. However, these conditions are not trading signals. The bands give no indication when the change may take place or in which direction the price could move.

Approximately 90% of price action occurs between the two bands. Any breakout above or below the bands is a major event. The breakout is not a trading signal.

The mistake most people make is believing that that price hitting or exceeding one of the bands is a signal to buy or sell. Breakouts provide no clue as to the direction and extent of future price movement.

Bollinger Bands are not a standalone trading system. They are simply one indicator designed to provide traders with information regarding price volatility.

John Bollinger suggests using them with two or three other non-correlated indicators that provide more direct market signals. He believes it is crucial to use indicators based on different types of data.

Because they are computed from a simple moving average, they weigh older price data the same as the most recent, meaning that new information may be diluted by outdated data. Also, the use of 20-day SMA and 2 standard deviations is a bit arbitrary and may not work for everyone in every situation. Traders should adjust their SMA and standard deviation assumptions accordingly and monitor them.

Keltner Channels are volatility-based bands that are placed on either side of an asset’s price and can aid in determining the direction of a trend.

The Keltner channel uses the average-true range (ATR) or volatility, with breaks above or below the top and bottom barriers signaling a continuation. 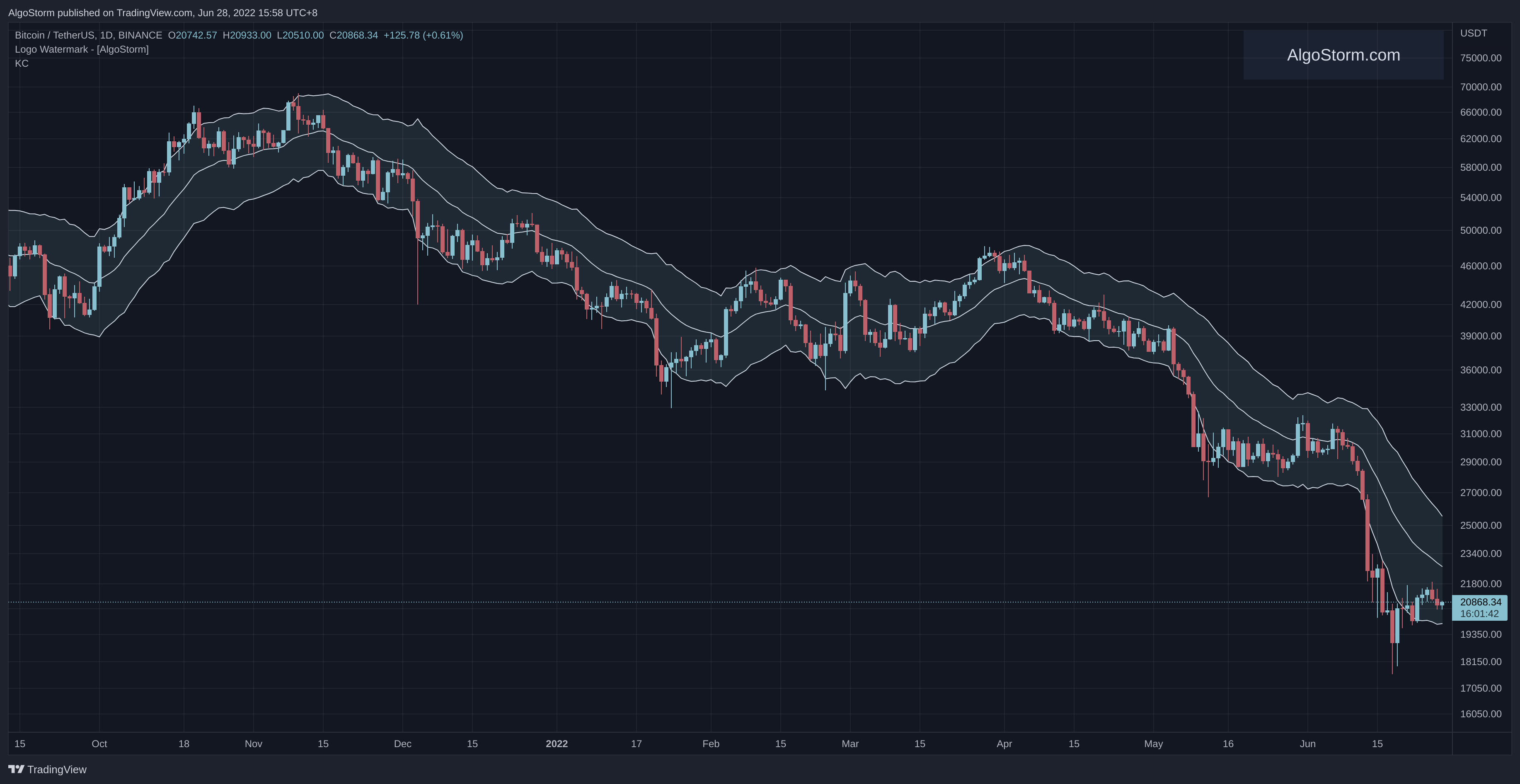 The Keltner Channel was first introduced by Chester Keltner in the 1960s. The original formula used simple moving averages (SMA) and the high-low price range to calculate the bands. In the 1980s, a new formula was introduced that used average true range (ATR). The ATR method is commonly used today.

Traders can set up their Keltner Channels any way they like, with the following potential uses in mind:

The usefulness of the Keltner Channels largely depends on the settings used. Traders first need to decide how they want to use the indicator and then set it up to help accomplish that purpose. Some of the uses of Keltner Channels, addressed above, won’t work if the bands are too narrow or too far apart.

While Keltner Channels can help identify trend direction, and even provide some trade signals, they are best used in conjunction with price action analysis, fundamentals if trading for the long term, and other technical indicators.

The bands may also not act as support or resistance and they may seem to have little forecasting ability at all. This could be due to the settings chosen, but there is also no evidence that the price moving two ATRs or hitting one of the bands will result in a trading opportunity or something significant happening.

Donchian Channels are three lines generated by moving average calculations that comprise an indicator formed by upper and lower bands around a midrange or median band.

Career futures trader Richard Donchian developed the indicator in the mid-20th century to help him identify trends. He would later be nicknamed "The Father of Trend Following."

Donchian Channels identify comparative relationships between the current price and trading ranges over predetermined periods. Three values build a visual map of price over time, similarly to Bollinger Bands, indicating the extent of bullishness and bearishness for the chosen period. The top line identifies the extent of bullish energy, highlighting the highest price achieved for the period through the bull-bear conflict.

Markets move according to many cycles of activity. An arbitrary or commonly used N period value for Donchian Channels may not reflect current market conditions, generating false signals that can undermine trading and investment performance.