What Are Support & Resistance Lines?

The concepts of trading level support and resistance are undoubtedly two of the most highly discussed attributes of technical analysis. Part of analyzing chart patterns, these terms are used by traders to refer to price levels on charts that tend to act as barriers, preventing the price of an asset from getting pushed in a certain direction.

Support is a price level where a downtrend can be expected to pause due to a concentration of demand or buying interest. As the price of assets or securities drops, demand for the shares increases, thus forming the support line. Meanwhile, resistance zones arise due to selling interest when prices have increased. 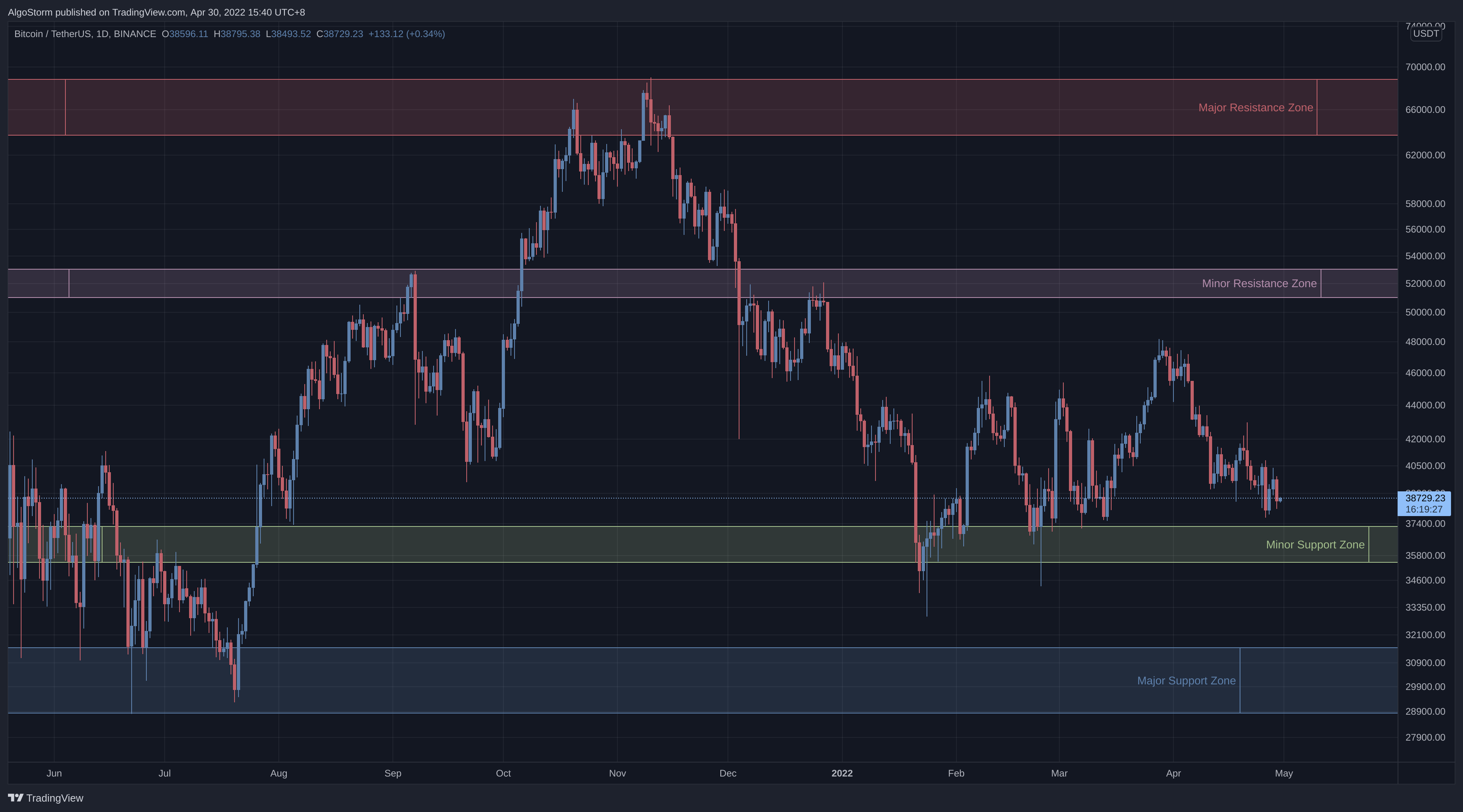 The examples above show a constant level prevents an asset’s price from moving higher or lower. This static barrier is one of the most popular forms of support/resistance, but the price of financial assets generally trends upward or downward, so it is not uncommon to see these price barriers change over time. This is why the concepts of trending and trendlines are important when learning about support and resistance.

When the market is trending to the upside, resistance levels are formed as the price action slows and starts to move back toward the trendline – (also called in this case the bullish trendline). This occurs as a result of profit-taking or near-term uncertainty for a particular issue or sector.
The resulting price action undergoes a "plateau" effect, or a slight drop-off in stock price, creating a short-term top.

On the other hand, when the market is trending to the downside, traders will watch for a series of declining peaks and will attempt to connect these peaks together with a trendline – (also called in this case the bearish trendline).

When the price approaches the trendline, most traders will watch for the asset to encounter selling pressure and may consider entering a short position because this is an area that has pushed the price downward in the past.

The support/resistance of an identified level, whether discovered with a trendline or through any other method, is deemed to be stronger the more times that the price has historically been unable to move beyond it. Many technical traders will use their identified support and resistance levels to choose strategic entry/exit points because these areas often represent the prices that are the most influential to an asset’s direction. Most traders are confident at these levels in the underlying value of the asset, so the volume generally increases more than usual, making it much more difficult for traders to continue driving the price higher or lower.

Unlike the rational economic actors portrayed by financial models, real human traders and investors are emotional, make cognitive errors, and fall back on heuristics or shortcuts. If people were rational, support and resistance levels wouldn’t work in practice! 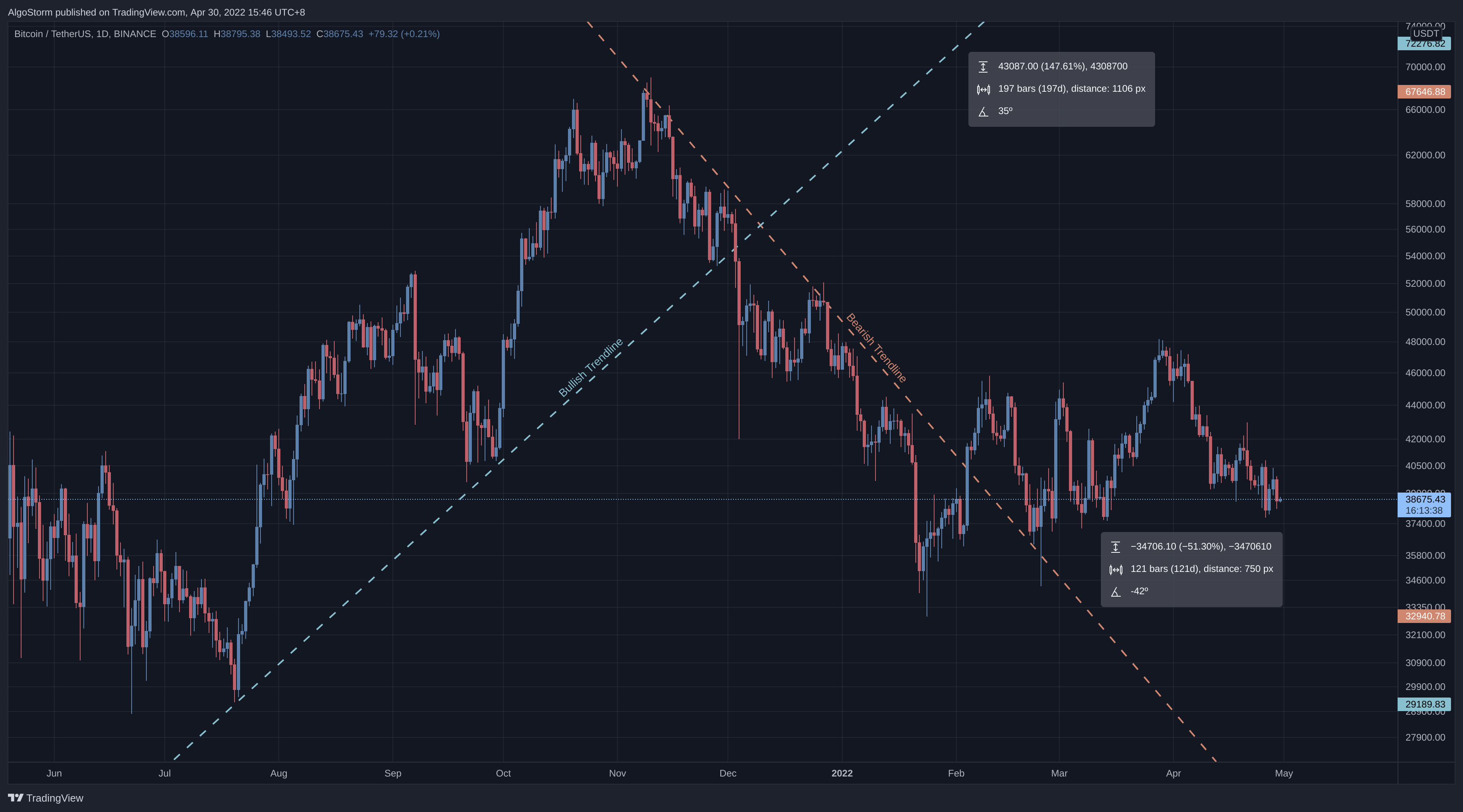 What Is Andrews’ Pitchfork?

Andrews’ Pitchfork is a technical indicator that uses three parallel trend lines to identify possible levels of support and resistance as well as potential breakout and breakdown levels.
It is created by placing three points at the end of previous trends and then drawing a line from the first point that runs through the midpoint of the other two points.

The reason this indicator is called a "pitchfork" becomes apparent from the shape that is created in the chart.

This technical indicator (sometimes referred to as "median line studies"), was developed by Alan Andrews. It uses trend lines that are created by selecting three points at the start of confirmed trends, higher or lower.
This is achieved by placing the points at three consecutive peaks and troughs. Once the points are in place, a straight line that denotes the “median line” is drawn from the first point through the midpoint between the upper and lower points. Upper and lower trend lines are then drawn parallel to the median line.

Andrews’ Pitchfork can be easily applied to price charts without a specialized drawing tool. It is also available as a drawing tool in all trading platforms. 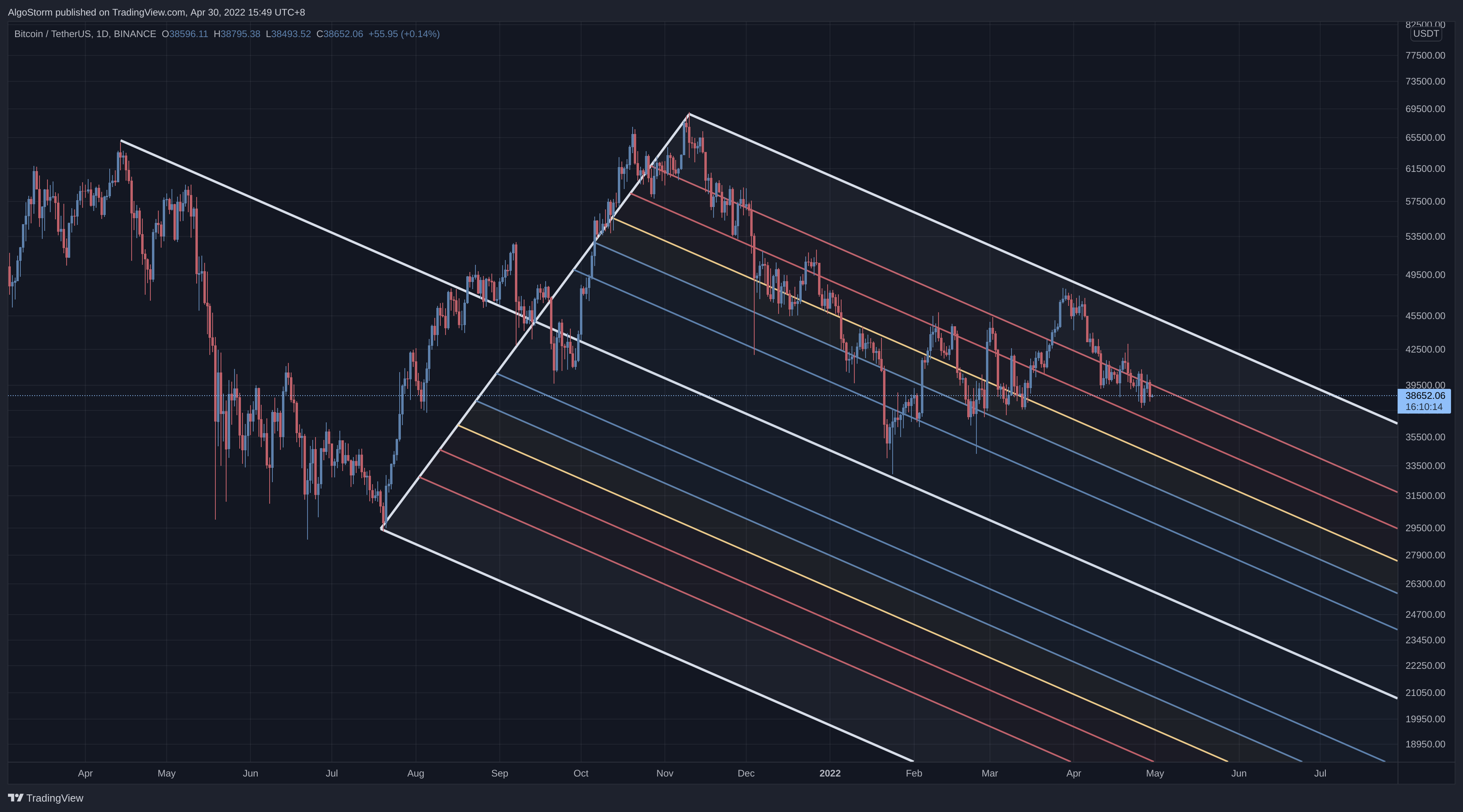 How To Use Andrews’ Pitchfork?

In general, traders will purchase the asset when the price falls near the support of either the center trendline or the lowest trendline. Conversely, they’ll sell the asset when it approaches the resistance of either the centerline or the highest trendline. Even though the centerline can be used to identify areas where a security may find support or resistance, it is generally not as strong as the two outside lines. In practice, the levels identified by this indicator are very useful for identifying strategic positions for stop-loss orders.

Traders could enter a long position when the price of a security reaches the bottom trend line of the indicator. Conversely, a short position might be undertaken when the price hits the upper trend line. Traders may consider booking partial or all profits when the security’s price reaches the opposite side of the pitchfork. Before entering a position, traders should ensure that support and resistance are stalling at these levels. Price should reach the median trend line frequently when a security is trending and, when that doesn’t happen, it may indicate an acceleration in the trend.

Andrews’ Pitchfork can also be used to trade breakouts above the upper trend line and breakdowns below the lower trend line. Traders using this bilateral strategy should be cautious of head fakes and look at other indicators to gauge the strength or weakness of the breakout or breakdown.

Keep in mind that selecting the most reliable three points takes skill and experience, which is vital because the indicator’s effectiveness depends on those points. Traders and investors can optimize this task by experimenting with different reactionary highs and lows, constructing and reconstructing the indicator to identify the most effective price points.

Most technical traders incorporate the power of various technical indicators, such as moving averages, to aid in predicting future short-term momentum, but these traders never fully realize the ability these tools have for identifying levels of support and resistance. As you can see from the chart below, a moving average is a constantly changing line that smooths out past price data while also allowing the trader to identify support and resistance. Notice how the price of the asset finds support at the moving average when the trend is up, and how it acts as resistance when the trend is down.

Traders can use moving averages in a variety of ways, such as to anticipate moves to the upside when price lines cross above a key moving average, or to exit trades when the price drops below a moving average. Regardless of how the moving average is used, it often creates "automatic" support and resistance levels. Most traders will experiment with different time periods in their moving averages so that they can find the one that works best for this specific task. 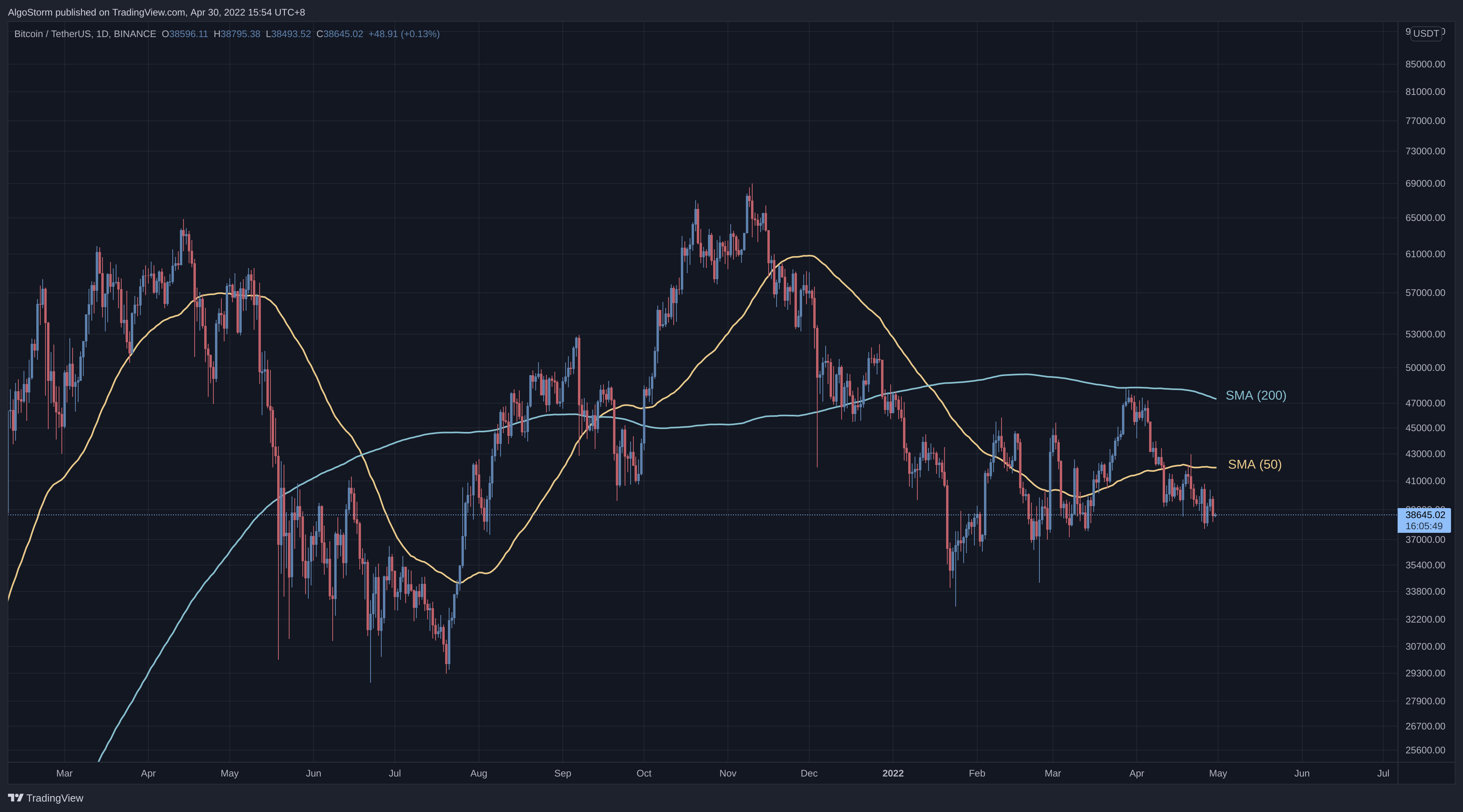 There are many different types of moving averages and listing them here is not possible. We will only list the most popular ones.

What Are Fibonacci Retracement Levels?

Fibonacci retracement levels—stemming from the Fibonacci sequence—are horizontal lines that indicate where support and resistance are likely to occur.

Each level is associated with a percentage. The percentage is how much of a prior move the price has retraced. The Fibonacci retracement levels are 23.6%, 38.2%, 61.8%, and 78.6%. While not officially a Fibonacci ratio, 50% is also used.

The indicator is useful because it can be drawn between any two significant price points, such as a high and a low. The indicator will then create the levels between those two points.

It is good to note that Fibonacci numbers are found throughout nature. Therefore, many traders believe that these numbers also have relevance in financial markets.

Fibonacci retracement levels were named after Italian mathemetician Leonardo Pisano Bigollo, who was famously known as Leonardo Fibonacci. However, Fibonacci did not create the Fibonacci sequence. Fibonacci, instead, introduced these numbers to western Europe after learning about them from Indian merchants. 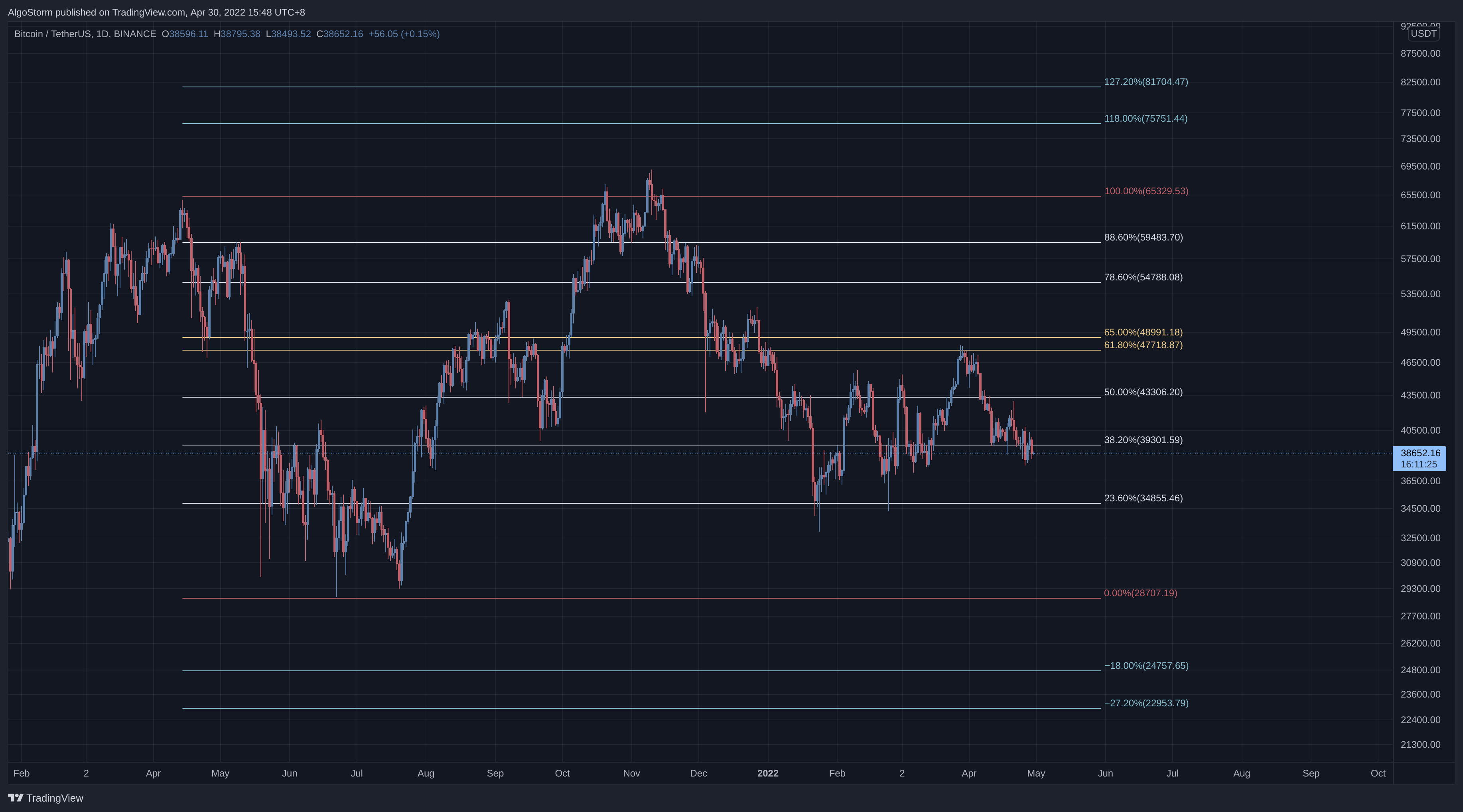 The Formula for Fibonacci Retracement Levels

Fibonacci retracement levels do not have formulas. When these indicators are applied to a chart, the user chooses two points. Once those two points are chosen, the lines are drawn at percentages of that move.

How to Calculate Fibonacci Retracement Levels

As discussed above, there is nothing to calculate when it comes to Fibonacci retracement levels. They are simply percentages of whatever price range is chosen.

However, the origin of the Fibonacci numbers is fascinating. They are based on something called the Golden Ratio.

The Fibonacci retracement levels are all derived from this number string. After the sequence gets going, dividing one number by the next number yields 0.618, or 61.8%. Divide a number by the second number to its right, and the result is 0.382 or 38.2%. All the ratios, except for 50% (since it is not an official Fibonacci number), are based on some mathematical calculation involving this number string.

The Golden Ratio, known as the divine proportion, can be found in various spaces, from geometry to human DNA. Interestingly, the Golden Ratio of 0.618 or 1.618 is found in sunflowers, galaxy formations, shells, historical artifacts, and architecture.

What Do Fibonacci Retracement Levels Tell You?

Fibonacci retracements can be used to place entry orders, determine stop-loss levels, or set price targets. For example, a trader may see a stock moving higher. After a move up, it retraces to the 61.8% level. Then, it starts to go up again. Since the bounce occurred at a Fibonacci level during an uptrend, the trader decides to buy. The trader might set a stop loss at the 61.8% level, as a return below that level could indicate that the rally has failed.

Market trends are more accurately identified when other analysis tools are used with the Fibonacci approach.

Fibonacci retracement levels are static, unlike moving averages. The static nature of the price levels allows for quick and easy identification. That helps traders and investors to anticipate and react prudently when the price levels are tested. These levels are inflection points where some type of price action is expected, either a reversal or a break.

While the retracement levels indicate where the price might find support or resistance, there are no assurances the price will actually stop there. This is why other confirmation signals are often used, such as the price starting to bounce off the level.

The other argument against Fibonacci retracement levels is that there are so many of them that the price is likely to reverse near one of them quite often. The problem is that traders struggle to know which one will be useful at any particular time. When it doesn’t work out, it can always be claimed that the trader should have been looking at another Fibonacci retracement level instead.

Why are Fibonacci Retracements Important?

In technical analysis, Fibonacci retracement levels indicate key areas where a stock may reverse or stall. Common ratios include 23.6%, 38.2%, and 50%, among others. Usually, these will occur between a high and low point for a security, designed to predict the future direction of its price movement.

What Are the Fibonacci Ratios?

How Do You Apply Fibonacci Retracement Levels in a Chart?

As one of the most common technical trading strategies, a trader could use a Fibonacci retracement level to indicate where he would enter a trade. For instance, if the trader notices that after significant momentum, a stock has declined 38.2%. As the stock begins to face an upward trend, he decides to enter the trade. Because the stock reached a Fibonacci level, it is deemed a good time to buy, with the trader speculating that the stock will then retrace, or recover its recent losses.

How Do You Draw a Fibonacci Retracement?

Fibonacci retracements are trend lines drawn between two significant points, usually between absolute lows and absolute highs, plotted on a chart. Intersecting horizontal lines are placed at the Fibonacci levels.